We have these apartments for rent near NoMa in Washington, DC 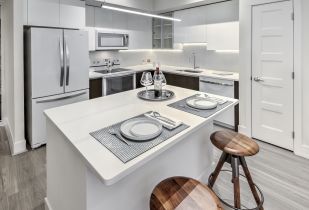 North of Massachusetts Avenue, the NoMa neighborhood in Washington, D.C. has been completely re-vamped. This former warehouse district is now home to cool, modern apartments. Camden NoMa apartments are no exception with studio, one, and two bedroom apartments that are all ultra-modern and ultra-cool.

Also known as Near Northeast, Atlas District, and H Street neighborhood, NoMa is right around the corner from Union Station and Capitol Hill. Just hop on one of the numerous Metro stops in NoMa to get where you need to go in the city or catch the commuter train to get out of the city.

NoMa is really known for its energetic nightlife and fine cuisine. The H Street corridor has many of NoMa's tastiest restaurants and bars where you can usually find locals on the weekends. H Street also has the best shopping in NoMa with everything from local boutiques and resale shops to national brands like H&M.

Residents of NoMa do their grocery shopping at a Giant grocer off H Street or the H Street Organic Market. There's also the Freshfarm market and the Union Market where you'll find fresh fruits and veggies and artisanal food vendors.

Camden NoMa apartments are in the heart of the NoMa neighborhood. These brand new apartments are just four blocks from Capitol Hill and include gourmet kitchens, stainless steel appliances and washers and dryers in every apartment. This smoke-free community even has a stunning rooftop lounge with a pool that overlooks the city.

Since Washington, D.C. is such a bike friendly city, Camden Noma apartments have a state-of-the-art bike storage and service room for residents to use. Plus, Camden Noma is within walking distance from the Harris Teeter grocery store off 1st street.